For the love of doing something new, my office mates and I tried wall climbing at Edge –  the Outdoor Specialist. It’s located along J.P. Laurel Avenue, Davao City, in front of Seda Abreeza Hotel, so it’s easy to find. The place looks underrated at first glimpse because it has a pretty smaller space compared to other wall climbing facilities in town – and you see the wall you are about to climb immediately even from the outside. But my initial impression on the place convinced me yet again to never judge a book by its cover. 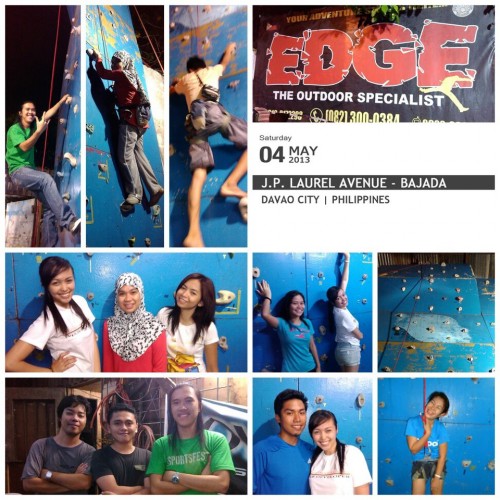 Edge Outdoor is open from Mondays to Sundays, 5-9pm, so that means wall climbing in nighttime – with the stars above you and the honking cars in the street. But all of these are sent to oblivion once you get your hands on those rocks! *insert rock music*

The wall can accommodate at most two people climbing simultaneously but we climbed one at a time. It looked easy, but when it’s your turn to ascend, you’ll regret thinking it was a piece of cake. The rocks, which have irregular shapes and sizes, were scattered in uneven distance, so you need to strategize your every move in order to reach the top without falling. It’s better to wear rubber shoes because the stones you’ll step on might hurt your sole if you climb barefoot.

When it was my turn to climb, I was a little nervous because judging from my friends’ faces before me, I could tell the journey upwards was not easy. I slowly climbed, stepped on bigger rocks while my hands were clutched to smaller ones. I could hear Miley Cyrus sing in the background “It’s the cliiimbbbbb”… 😀

My friends were coaching me where to step on next like “there’s a rock on your left foot” or “on your right, on your right”, but this I tell you: once you’re up there and both your hands and feet were shaking, you lose your sense of direction. Trying to figure out where’s your “left and right” was comparable to finding the value of “x” in an algebra problem, except that you’re under time pressure or else you’ll be fed to sharks. In short, it can be mentally stressful.

But you can always choose to go down anytime you feel weary, all you have to do is let go of your hands and kick the wall as you are pulled downwards. The “kick the wall” part is the best part because it made me feel like an action star rappelling myself down from a tall building in a heist movie. COOL, isn’t it? 😀

It’s best to bring your friends with you so you have people who could either cheer or bully you. Cheer when you’re going up and bully when you weren’t able to reach the top. I was a big bully myself so I got bullied, too! It was a well-deserved karma.

For P100, you can try wall climbing for how many times you want. But your first try can be exhausting already, so it’s impossible for you to climb a bajillion times no matter how many gallons of Cobra energy drink you drank before the activity. But we tried climbing for the second time, some of my colleagues had better performances than their first attempts, while others did not have any improvement at all. I was one of those who didn’t improve.

I was stuck in the fifth level just like in my first try because my hands were trembling already and I didn’t have enough arm strength to stay that long. This time, trying to find the right rocks to step on was like manual multiplication of 10 digit numbers. I. JUST. CAN’T. DO. IT.

They joked around saying I was no better than my first try; I didn’t improve, yes, but at least I was consistent. Bleh!

There were eight of us who tried wall climbing, but only three managed to reach the finish line (if that’s what you call it). Two boys (Myke and Majar) and 1 girl (Mayeth). Applause, anyone? But hats off to Mayeth, the paper-weight superwoman, because she managed to reach the top TWICE with considerable speed and ease. Seriously, she was like Spiderman trapped in Gwen Stacy’s body.

I’d sum up the wall climbing experience in one sentence: It’s a fun and extreme outdoor activity that challenges your agility, endurance and mental strength.

Will I do it again? Why not?? I’d rather wall climb than social climb, you know. 😉

P.S.
So you really want to try yourself the mentally harrowing experience of relating wall climbing to mathematics, huh? Book a reservation by contacting Rey Sumagaysay through this number 09198172298.
——–

Izza Aima Montederamos is a web content writer who is a big fan of deadpan and self-deprecating humor. Her greatest dream is to solve sudoku puzzles while skydiving. If you’re not busy, you can visit her blog, Alive in Retrospect , just so it will have visitors. You can follow her on Twitter: @izzaaima19.