A special gathering of animators and graphic designers dubbed as “Graphicon Davao: Graphic Design Conference 2012” was held on December 1, 2012 (Saturday) at the CAP Auditorium in Davao City. The said event was organized by DUAAD (Davao United Association of Animators and Designers, Inc.) and participated by various sectors, including delegates from business as well as from the academe. I was able to experience the said convention myself (I was one of the participants) and I could say that it was indeed an exciting and fruitful gathering – no wonder why the event drew thousands of participants.

This convention is one of the most awaited events every year especially to those who are interested in web arts; for students and even professionals who want to learn about multimedia and graphic design, branding, visual effects and web technology.

Part of the convention that I liked most was hearing inspiring stories and ideas from the best artists all over the country and I can say they really are the best in their fields.

I was amazed by Chad Manzano’s  talk where he shared about his works, which  is, in general, about illustrations for t-shirts and clothing lines. Some of his works are in collaboration with Urbandub, a well-known rock band here in the country. Although he was a little bit weird with his sun glasses on all the time in a dark auditorium, he did not fail the kids with his enthusiasm – both in his work and passion in vector art.

The second speaker was Ritchie Baquirin, a director of PGDA or Philippine Graphic Design Awards.  His talk was about Windows 8.

After the break the convention heats up with a short game “are you smarter  than a 5th grader Philippine edition”.  That was fun!

The 3rd speaker was Val Nizam Villar. He talked about HTML 5, CSS 3, User Interface, typography, Semantics, and Web standards, which were nice inputs especially for me as I deal a lot of  Wordpress tasks.

The 4th speaker was even more interesting, the crowd was thrilled when this one-time amateur boxing champion Isabela Gatuslao, a branding specialist, was introduced. She shared her experiences about her works in prestigious brands including National bookstore, Daphne Osena Paez, and Lucy Torres.

Aseo or Vincent Rhafael Aseo, a graduate of AB in Multimedia Arts in Asia Pacific College, was the 5th speaker. He shared his funny experiences before reaching the top in his career. He said that “chicks dig vector” that’s why he is doing it.  This passion has led him to Germany and helped him to work at Oracoms, the Book of Creations in France and The Imperial college of London Magazine.

The last but not the least speaker was Nico Puertollano,  a coño guy from LA with ‘astig’ performance and presentation of motion design.  The Executive Creative Director of Flux Design Labs gave the participants bird’s eye view on motion design. 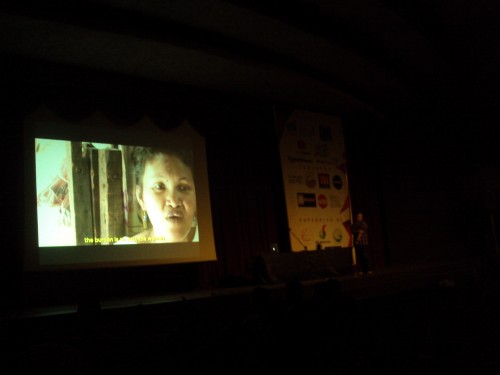 The event indeed a big success – and I am looking forward for the next edition of this event next year.