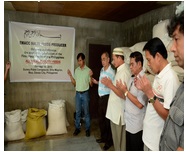 Feeds are one of the basic & primary production in Global trade, particularly most widely known in Muslim tradition in Mindanao Region XII, most likely in Northern Cotabato in term of volume. They are rank second after applying non-organic material mixtures. It is known that the Muslim and Christian people had invented in the new era dimension that approximately have reached 2.5 million tons.

This figure is about 25% more than the total conversion into local agricultural production, that has been associated with organic products since 1991-2012, that according to the united nations of Muslim leaders conference on trade and development data processing.

Other items listed by emacc